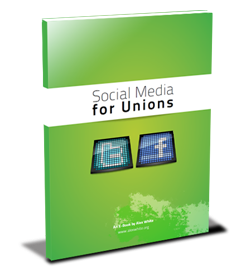 Alex White is an Australian trade unionist and webhead who publishes his thoughts on unions and the internet online. Now he has made available a quick guide for unions in their use of social media.

Free to download HERE.
Posted by Derek Blackadder at 7:39 AM No comments:

Online Workers of the Future Unite! 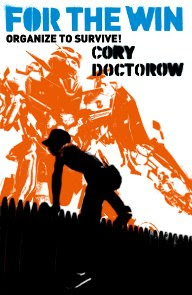 Corey Doctorow is a well-known speculative fiction writer who is also something of an online activist and a new media critic (see his work re. Creative Commons licensing and his time at the New Frontiers Foundation.

Corey's latest book is about the struggle of young online workers to organize. If that doesn’t grab you the title will: For the Win: Organize to Survive. It's tagged with 'young adult fiction' but I had a fine time with it (OK, that might say more about me than about the book) and it's getting great reviews.

Sometimes we need to hear about organizing tactics hurting employers – enough for them to spend money countering them – before we take the tactics seriously. That’s why I’m giving SMS (texting) even more space here in my WebWork column.

Text messaging to organize flash mobs in support of strikes or to otherwise put sudden, organized and unexpected pressure on an employer is becoming a common tactic in Europe,particularly in the retail sector. Last Christmas, the Association of German Retailers filed a complaint with the nation’s highest court in an attempt to ban the use of flash mob tactics by thepublic sector workers’ union, Verdi, in labour disputes. Using SMS, strikers and supporters could converge on a single store on short notice. Large numbers of people lined up at cashiers’ stations to buy a single item. Others filled carts with food, and then abandoned them for managers to re-shelve.

These are effective tactics – a surprise to the company. No one aside from a small committee knows where or when the action will happen. Volunteers provide a mobile phone number and get less than an hour’s notice of the action. No posters, no newsletters, no overnight lags while a phone tree operates that an employer can use to prepare. A flying squad on steroids. Fast, flexible, nimble.

As I write this, a second wave of strikes is hitting Chinese auto parts plants. Seen the photos the Globe and the Guardian have been carrying? Those workers are staring at their phones not because they have nothing else to do. They’re getting directions and updates from the strike committee.

Both text messaging and micro-blogging (using the Twitter site) from a mobile phone are also becoming useful (or possibly not, we’ll see) tools in internal local union organizing. Recently I’ve started to see members at meetings tweeting and texting summaries of discussions at membership meetings to co-workers who couldn’t or wouldn’t come to a meeting. Unions need to give some thought to the implications of this increasingly popular practice.

A while back I mentioned Twitter and the tweeting that went on during last fall’s CUPE national convention. I’ve since compared notes with a few members and staff. We’re pretty sure that, on several important resolutions, there were more people in the hall tweeting their thoughts on the resolution being debated than there were delegates at the mics. And that’s just the tweets using the “official” hash tag (tweets organized around a topic) for the convention. Opining online is faster than waiting to get to a mic; it doesn’t induce stage fright; and it allows for a back-and-forth debate that the rules of order don’t and can’t allow for. It also, and this deserves some thought, allows for members at a meeting, conference or convention to have input from members who aren’t in the room before they cast a ballot. My reflexive reaction to this is to think: “Wow! Representative democracy gets a boost!” Delegates will no longer just be elected and then sent off to do whatever and then report back; members can now provide them with feedback and direction in real time.

But there are down sides too, and they’re worth considering. (Or am I just past it?) For sure there is the question of whether we’re creating two classes of members: one that is techsavvy and gets more input into the union’s direction, and one that isn’t and so loses out as we have fewer face-to-face meetings and more interaction online. Are we at the point where we can say that those who don’t tweet are those who don’t want to rather than those who can’t?

The recent LabourStart 2010 conference in Hamilton, Ontario, saw some less serious use of Twitter. The hash tag (a text string starting with the “#” sign that you can use to find tweets on the same topic) “#LSCONF2010” was created and advertised to the 200 participants. We suggested it be used by people looking for rides to and from Pearson Airport and such mundane things. Instead, we were treated to realtime reviews of workshops, speakers and even the quality of the lunches.

Judy Rebick, our keynote speaker, may have been responsible. In her opening address to the conference she made a point of looking at the screen over her head on which the conference logo appeared. She explained that she had recently attended an event where Twitter postings on speakers were projected over their heads where they couldn’t see them, but where everyone else in the room could. Sounded a hoot and worth setting up. Unless, of course, you’re the speaker.

SITES TO CHECK OUT

The AFL-CIO has created a nice one-stop-shopping site for unemployed workers (union and not) at www.unemploymentlifeline.com. A nice bridge to workers often lost to their unions or never a member. The Association for Progressive Communications advocates for an accessible and open Internet available globally for use in creating a more just world: www.apc.org. New (at least to me) is the online journal Global Labour at http://digitalcommons.mcmaster.ca/globallabour/.

The always interesting Cyberunions (http://cyberunions.org) has posted the results of their survey of unions online. Aside from the health and safety content, http://www.workscape.ca/ is worth looking over if you’re thinking about setting up a members-only discussion forum. My favourite model airplane and travel forums use the same software.
Posted by Derek Blackadder at 4:37 AM No comments:

From Stalin Ate My Homework:

“To be at the congress of a large trade union in the 1960s was a little like attending a rock festival where the stars up on the stage were balding alcoholics in ill-fitting suits talking gibberish.”

For more on Alexei, my favourite Marxist stand-up comedian, see HERE.
Posted by Derek Blackadder at 5:11 AM No comments:

The latest LabourStart Labour Photo of the Year contest is up and running.

The panel of three distinguished labour photogs has selected five finalists. You can view all five and vote for your favourite HERE.

At midnight GMT on 31 December voting will close and the finalist with the most votes will be declared the winner.

Some great images here, be sure and visit and vote soon.
Posted by Derek Blackadder at 7:32 AM No comments: